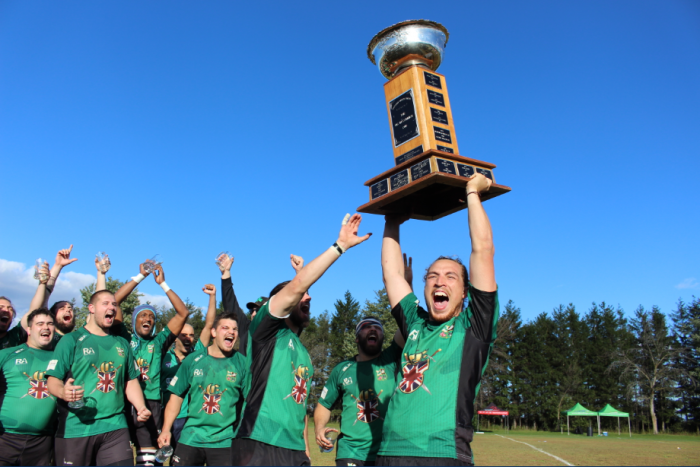 (MARKHAM, ON) – The 2018 McCormick Cup Final displayed some top-notch senior men’s rugby at Fletcher’s Fields on Saturday. The Brantford Harlequins and Markham Irish ran onto the field on a beautiful September afternoon with a chance to hoist the sacred McCormick Cup. The Harlequins had been there and won the two years prior, while the Irish returned for the first time since their 2013 win and were looking to dethrone the champions.

In the end, the Markham Irish outlasted a strong Brantford Harlequins squad to win their sixteenth provincial title.

The first half was a dogfight as the two squads ended the frame in a 10-10 deadlock. The Irish put points on the board first with a penalty kick by John Sheridan six minutes into the game. Just minutes later, Sheridan intercepted an errand Brantford pass for a 95-metre run to score under the posts. His conversion was good and just like that, the third-seed Markham Irish were up 10-0 on the first-seed Brantford Harlequins. The Harlequins added two tries in the corner to finish the half, tying it up at 10 apiece. The Brantford tries were scored by Connor Fitzsimmons and Adam Schouten.

In the second half, the Irish opened the scoring as Lee Keegel chased a grubber kick downfield to touch it down. Sheridan converted the try to give the Irish a 17-10 lead with just over 30 minutes to play. Steve Piatek answered back for the Harlequins with a slotted penalty kick to bring it to 17-13. Brantford then scored a try shortly thereafter to get their first lead of the game at 20-17. In the dying minutes, the Markham Irish were pushing hard in the Brantford end, but the Harlequins defense looked to be able to hold the Irish onslaught. It was only when a small weakness on Brantford’s defense was exploited that Markham began playing with advantage. Sheridan chipped the ball with his boot up and over the Brantford stronghold and jumped on his own ball to score his second try of the match. Irish captain Jesse Lofthouse converted Sheridan’s try to give Markham the 24-20 lead. They took that lead into the final whistle and were crowned 2018 McCormick Cup Champions.